An open symposium “Religion and New Humanism – Its Acceptance and Progress in Japan” was held by the Niwano Peace Foundation, June 3rd 2018

An open symposium entitled “Religion and New Humanism – Its Acceptance and Progress in Japan” was held by the Niwano Peace Foundation on June 3rd 2018, at Sophia University in Yotsuya, Chiyoda ward, Tokyo, with the cooperation of the ‘Between Religion and Religious Studies’ study group. Dr. David Carrasco, a faculty member of the graduate program of Harvard University Divinity School, was the featured guest speaker. About fifty participants attended, including persons affiliated with religious groups and students. 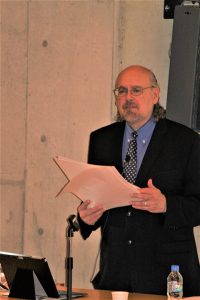 The original aim of this symposium was to acquire a deeper understanding of the book Between Religion and Religious Studies, which was published with the support of an NPF Grant for International Research. Dr. Carrasco’s visit to Japan provided the opportunity to hold this fourth meeting of the symposium, as he is one of the authors of the book.

‘Religion and New Humanism, the theme of this symposium, is a theory proposed by Dr. Mircea Eliade, a well-known 20th century historian of religions who widely surveyed religious myths and rituals and engaged in extensive study of the philosophies of world religions. At the lecture, Dr. Carrasco explained the meaning and genealogy of this approach, which tries to gain a deeper understanding of what it is to be human not only from the perspective of western humanism with roots in Christianity, but also by investigating the religions and spirituality of Asian peoples and indigenous cultures.

In addition, Dr. Carrasco introduced the work of the late Dr. Michio Araki, a scholar who developed the theory of religion and new humanism in Japan. Dr Araki is one of the co-authors of Between Religion and Religious Studies and was a student together with Dr. Carrasco at the University of Chicago. Dr. Araki discovered that the common feature of every religious group that has gained popular support since the Meiji era is the goal of providing relief and healing for the harsh trials and pain experienced in life. Dr. Carrasco also touched on the major achievement of Dr. Araki’s work—identifying the distinguishing feature of modern Japanese popular religions to be the phenomenon of each believer reflecting on their own experience through reading the autobiography of their religion’s founder. 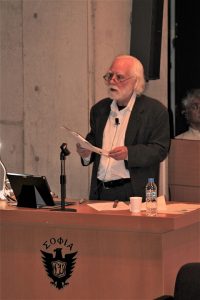 Following Dr. Carrasco’s talk, Dr. Richard Gardner, Professor Emeritus of Sophia University in Japan, also spoke. Dr. Gardener provided an example of new humanism in Japan by introducing the activities of the Asia Institute, in Nasu city, Tochigi prefecture, which provides training in agricultural methods and education for peaceful coexistence based on the ethos of love in Christianity. Dr. Gardiner also discussed ‘labyrinth walks,’ a spirituality of ‘facing oneself’ through the meditative practice of walking along a circuitous path that winds its way to the center of a circle. 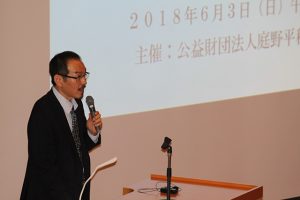 Summary of the lectures

・Lecture by Dr. Carrasco, an open Symposium ‘Religion and New Humanism’ by NPF（PDF）

・Response by Dr. Gardner, an open Symposium ‘Religion and New Humanism’ by NPF（PDF）