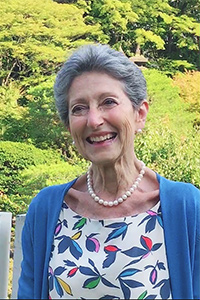 “The difference in the lives of each of us is made by the fact of believing in eternal life or not. Everything seen in the perspective of eternity assumes different contours and becomes meaningful. The search for peace along with religious people of other faiths also assumes a renewed relevance from this convincement”

Flaminia Giovanelli was born in Rome, Italy from a generally international family. She grew up in Brussels, Belgium and was formed by the universal breath of the Catholic Church. All this prepared her to appreciate and love the service she provided to the Holy See for 43 years, almost 10 of which as Under-Secretary of the Pontifical Council for Justice and Peace and of the Dicastery for Promoting Integral Human Development. In fact, to serve the Holy See is to serve the Human Family and this is what Flaminia has tried to do, having had the extraordinary experience of accompanying “The joys and the hopes, the griefs and the anxieties of the men of today” and especially those of the poor. She has been able to do this thanks to her service of the Pope and the universal Church that put her daily in contact with what was happening in every part of the world in the field of justice and peace. In this respect, she received, in the course of these long years, direct testimonies from Christians and non-Christians who were active at every level of the Church, in international institutions and in civil society. The evolution of the present world increasingly helped Flaminia to address the different issues she dealt with – principally work, poverty, development, peace – in an interreligious way. In the course of these decades straddling two centuries Flaminia has been able to identify a constant: promoting the cause of justice and peace ultimately means defending the human person and his or her true rights as a creature of God. The defense of the rights of poor girls in a poor area of Mozambique, the promotion of their dignity and their education and formation is Flaminia’s main commitment at the moment, in her capacity as president of the Association O Viveiro (www.oviveiro.org). She is also Member of three other Foundations.
Flaminia Giovanelli earned a degree in Political Sciences from La Sapienza University of Rome, a degree in Library Sciences from the Vatican School of Library Sciences and a degree in Religious Studies from the Pontifical Gregorian University. In May 2014 Flaminia was awarded the Honorary Doctorate of Humane Letters (L.H.D.) from DeSales University. In 1997 she was made Dame Commander with Star of the Pontifical Equestrian Order of St. Gregory the Great.
Flaminia enjoys writing rhyming picture books for children published by Editrice Cantagalli.