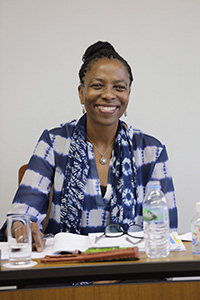 “I have learnt over time that having the ability to humble myself and be open to possibilities of being taught by those I interact with, has had a positive effect in my work life. This to me speaks to the ability of always encountering others as human beings deserving of honour and respect”.

Ms. Nomfundo Walaza of South Africa is currently the Executive Director of Peace Systems. Her previous positions include CEO of the Desmond Tutu Peace Centre and Executive Director of the Trauma Centre for Survivors of Violence and Torture. Ms. Walaza is a registered Clinical Psychologist trained at the University of Cape Town.

Ms. Walaza played a leading role in shaping a gender response to the South African Truth and Reconciliation Commission (TRC) and was part of a group of professional mental health professionals that mobilized to assist survivors of human rights violations during its hearings. She participated in a BBC programme entitled “Facing the Truth” with Archbishop Desmond Tutu, which facilitated encounters between victims and perpetrators of the Northern Ireland troubles. This was one of the experiences that brought her to appreciate the commonality in human suffering.

She has facilitated non-violence workshops in a number of countries, and was invited as part of a team of international experts to facilitate dialogues aimed at mutual understanding and acknowledgement between Palestinians and Israelis in Jordan and Cyprus.

Ms. Walaza is an Anglican and a person of faith who has served the Anglican Church in many roles, including serving as a representative to the United Nations Commission on the Status of Women. She co-founded Women Demand Dignity in order to encourage religious leaders to be vigilant about the abuse of women and children in South Africa.

Dedicated to convening safe spaces for difficult dialogues, Ms. Walaza currently focuses on developing processes to create an atmosphere of inclusion and mutual respect across racial and cultural lines, particularly in Institutions of higher learning as students seek to dismantle colonial and apartheid era practices and symbols. Ms. Walaza also facilitates Unyoke retreats for individuals worldwide who have dedicated their lives to foster human rights, peacebuilding and reconciliation. Ms. Walaza is a staunch advocate for women’s and children’s rights in South Africa and beyond.

Ms. Walaza’s academic associations include UC Berkeley, Smith College, and the Denver University Graduate School of Professional Psychology. She presents often on the psychological implications of the South African TRC, and has published widely. She is presently concerned with exploring the use of African knowledge systems in understanding and addressing healing modalities and the manifestations of “woundedness.”

In 2010 she received the AAUW/NASPA Women of Distinction Award from the National Conference for College Women Student Leaders at the University of Maryland. She currently holds and shares with Chris Spies the Waging Peace Award founded by President Carter in 1979.